David’s condition started about 3 years ago and in early 2010 he saw an NHS doctor who told him surgery was the only option available at that time with a high chance of recurrence.

He was advised he should wait until it got worse before he went for surgery. The NHS will not treat this condition until the angle of contracture meets their regulations.

As time progressed his conditioned worsened and his wife saw an article in a magazine about the Xiapex injection. After some research on the Internet David came to see Mr Harry Belcher, hand surgeon at The McIndoe Centre and had the Xiapex injection with the manipulation the following day.

He said, “There were a couple of days where the hand was feeling a bit tender and bruised but it soon cleared and now I am back playing the piano properly again. It feels really good and I am glad that I have been able to avoid surgery.”

Commonly known as ‘the Viking disease’ because it is believed to have been spread in the UK by marauding Vikings, the condition usually begins as a thickening of the skin on the palm of the hand.

As it progresses, the skin on the palm can appear dimpled and firm lumps which can be sensitive to the touch can form. In later stages, cords of tissue form under the skin on the palm and can extend up the fingers. As these cords tighten, fingers can be pulled toward the palm, sometimes severely and in so doing create a claw like appearance. 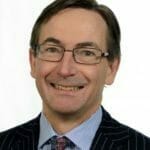 Harry Belcher has been a Consultant Hand Surgeon since 1993. His interests are nerve compression and Dupuytren's contracture with additional interests in rheumatoid arthritis.  He was one of the earliest users of Xiapex in the UK for treating Dupuytren's and now has considerable experience in its use.